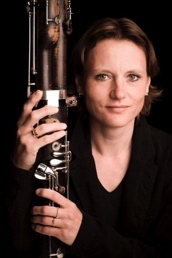 Marianne Prommel was born in a musical family in Purmerend, in the north of the Netherlands. She started studying bassoon with Ronald Karten (Royal Concertgebouw Orchestra) and continued at the 'Sweelinck Conservatorium Amsterdam' and the 'Utrecht school of arts' with John Mostard (Rotterdam Philharmonic Orchestra)
Except that Marianne Prommel plays in various chamber music groups, she was successively member of the Dutch Radio Symphony Orchestra and principal bassoon player in the Dutch Ballet Orchestra. Since 1992 is Marianne member of the Rotterdam Philharmonic Orchestra.

As a student Marianne played in the 'Dutch National Youth Orchestra' and in the 'International Orchestral Academy of the Schleswig-Holstein Musik Festival' lead by the American conductor Leonard Bernstein.

“Second bassoon players play a special role within an orchestra. In most cases the second bassoon plays the bass-note of a chord, for example in a final pp-chord of a symphony. In these situations it is extremely important to have total control over pitch, dynamics and color, especially when working with demanding conductors as Valeri Gergiev and Yannick Nezet-Seguin. The other woodwinds are totally reliant on the base-notes of the second bassoon-player. A dark and stable sound can help tremendously. This modified Rieger 1a reed made by Hans is the perfect tool to achieve this. (M1a-model, Marianne’s 1a) It produces a warm, dark, easy to control sound, both in pp and ff. I ask Hans to select the best cane for my reeds. The reed delivers slightly more resistance and that combines perfectly with my bassoon.
Another advantage… I play every program on new reeds, ...as long as I do the laundry. Was there a better reason to get married to this guy?”